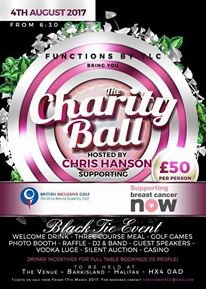 Speechless to say The #CharityBall @BInclusivegolf @breastcancernow raised £12,330!!!!
Below is the press release for the evening, again thanks to everyone who supported the event!
The #CharityBall raises over £12,000!
Over 200 people descended on The Venue in Halifax on Friday night (4 August 2017) for a #CharityBall in support of Breast Cancer Now and the national charity, British Inclusive Golf (BIG).
Hosted by European Tour golf professional, Chris Hanson, his caddy Steve Tooby, and their respective wives, Laura and Tracey, the event attracted interest from across the country and beyond, with guests travelling from as far as London and monetary donations coming from the US.
Both charities were personally chosen by Chris, the first being Breast Cancer Now, a charity dedicated to funding research into the devastating disease, and secondly British Inclusive Golf, a charity for which he is the ambassador.
Chris was delighted with the event, “after all the guests were treated to a red carpet and photographer on arrival, the fantastic MC, Billy Wheadon, quickly set the tone for the evening – to have a lot of laughs whilst raising a huge amount of money – and we certainly did both!”
Money was raised through ticket sales, donations, a photo booth, vodka luge, casino tables, Trackman longest drive, silent and live auctions, and an incredible raffle.
Admiring the raffle collection, Steve Tooby said, “the display of raffle prizes was the best I have ever seen. A small committee spent the last six months recruiting a variety of things, including a holiday for ten to the South of France, bespoke golf clubs, hospitality tickets, pamper treatments – and more! We cannot thank everyone enough – from the many leading golf manufacturers, guests on the night, to businesses from around Yorkshire who dug deep and supported this event.”
Guest speakers during the evening included representatives from British Inclusive Golf who, emotionally, told first-hand the impact the charity has had on their personal lives and the positive effect it has had.
Delighted with the evening, BIG Chairman Kevin Booth said, “for the evening to raise a total of £12,330 is just astonishing. This will make life changing differences to many people in the coming years. We are forever grateful for the generosity of everyone involved.”